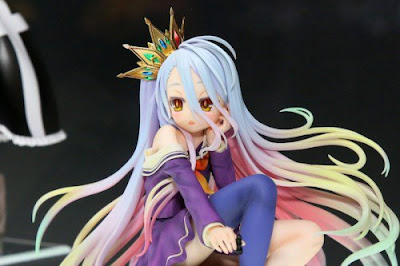 Sup! Rintare in da building. So, I said I was going to share the process behind my Shiro crown that I made for Katsucon 2015 and here it is! I really wanted my Shiro to resemble the figure more so than the anime, so I pulled my references for the crown from the figure.I guess I'll try to make this as tutorial-y as I can. Sorry in advance for lack of pictures as I didn't capture every single step of this!

So first I made a paper mock-up after Kuritare did some dimensional analysis on the figure to match the size to me. Despite all the number crunching, I still needed some adjustments because well...I'm not an anime figure and I'm much taller than Shiro. I made...a lot of paper mock-ups before I was satisfied with all the angles. The structure is strange because the crown is not a complete circle. Shiro and Sora apparently break a crown in half,  but this crown is really far from being a half circle. It appears to be about 7/8th of a circle, just enough room for a ponytail to fit through.
After tracing the mock-up onto the foam, I drew the mock-up again with the decorative ridges (? I guess I'll call it that).
So, in total I had 9 pieces of foam: the 7 pieces, the long, skinny, and fragile decorative piece which also helps to hide the separation between the 7 main pieces, and a backing piece which I used to glue the main 7 pieces onto (so they have something to align to) which is not pictured, but you'll see it later.
Next, I painted all my pieces! First, I went over each piece with spray paint primer (it's white). I think this also helped fill in the porous foam as well to make the crown look smoother. Primer and two coats of gold did the trick.
Now I just glued and glued and glued! Below you'll find the picture of a main crown piece as I glue it to the backing piece. I decided to use two pieces of wire because I didn't want the crown pieces to be teetering on one piece of wire. So, I glued the wire to the backing and then glued the pieces on. Finally, I glued the decorative piece on. I then CAREFULLY bent the whole crown into the right shape. It was very scary.


Great! Next, I had to pick out the right gems for the job! Luckily, my big bag of gems from Michaels had all the large gems I needed and Lili gave me some small oval gems as well. Because I used premade gems, I obviously wasn't going to be accurate, but I think they did the job just fine. Making your own gems can be expensive and time consuming!


Our friend Shifty Cosplay also asked me to make him a Sora crown. The process was similar except I just made it one huge piece of foam. There's a back piece and wire as well.


Thanks for reading! I hope you found this at least somewhat helpful! I would be happy to answer any questions about it too. (= 3=)

Posted by TareTareTare at 10:49 AM

Hello! We are Lilitare, Kuritare, and Rintare. Together we are taretaretare!! Here you'll find our in-depth posts about our convention adventures and more. Be sure to check out our other social media links too!


Our favorite cons are: